The son of a gardener, James Duncan enlisted in the 17th Lancers in 1842.

Promoted from the ranks during the winter hell of the Crimean War, he went on to fight in the Indian Mutiny, before becoming the Fort Major of Edinburgh Castle, and retiring as an Honorary Colonel.

He is the subject of my new book, ‘A Professional Soldier’, which examines the everyday existence of a 19th century cavalryman, as he rises through the ranks from Private to Colonel. Exploring the routines, drills, tactics, and ideals, which would have made up Duncan’s daily life, and defined him as a career soldier.
(While hopefully proving that far from being blunderers, most Crimean War soldiers were competent professionals.)


Read a review of 'A Professional Soldier' here.


See Pictures From The Book Here.


BUYING the book.
A Professional Soldier is available as a perfect bound paperback:

If you are in Europe, click here to buy from Lulu.com

If you are in Oceania, send an email to the author directly at:
de-scribemedia@outlook.com 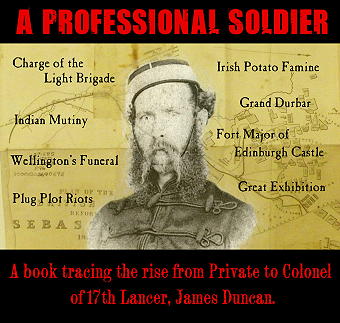